A Third of the U.S. Faces Drought

Earth Observatory, August 11: As the United States moves into the last weeks of climatological summer, one-third of the country is experiencing at least a moderate level of drought. Much of the West is approaching severe drought, and New England has been unusually dry and hot. An estimated 53 million people are living in drought-affected areas. 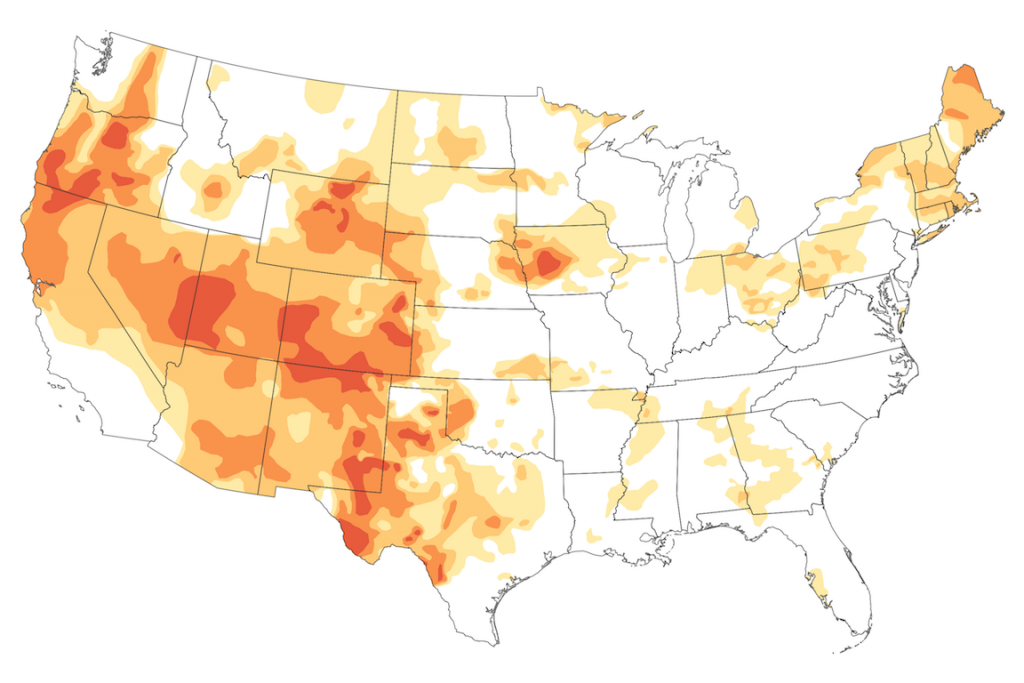 The map above shows conditions in the continental U.S. as of August 11, 2020, as reported by the U.S. Drought Monitor program, a partnership of the U.S. Department of Agriculture, the National Oceanic and Atmospheric Administration, and the University of Nebraska–Lincoln. The map depicts drought intensity in progressive shades of orange to red and is based on measurements of climate, soil, and water conditions from more than 350 federal, state, and local observers around the country. NASA provides experimental measurements and models to this drought monitoring effort.

According to the Drought Monitor, more than 93 percent of the land area in Utah, Colorado, Nevada, and New Mexico is in some level of drought; 69 percent of Utah is in severe drought, as is 61 percent of Colorado. More than three-fourths of Oregon, Arizona, and Wyoming are also in drought. The effects of “severe” drought include stunted and browning crops, limited pasture yields, dust storms, reduced well water levels, and an increase in the number and severity of wildfires. Most of those areas had no sign of drought in the mid-summer of 2019.

The map below shows surface soil moisture as of August 10, 2020, as measured by the Gravity Recovery and Climate Experiment Follow-On (GRACE-FO) satellites. The colors depict the wetness percentile; that is, how the levels of soil moisture compare to long-term records for the month. Blue areas have more abundant water than usual, and orange and red areas have less. The darkest reds represent dry conditions that should occur only 2 percent of the time (about once every 50 years). Note that the Mississippi and Missouri river watersheds are still quite moist from persistent winter and spring rains. 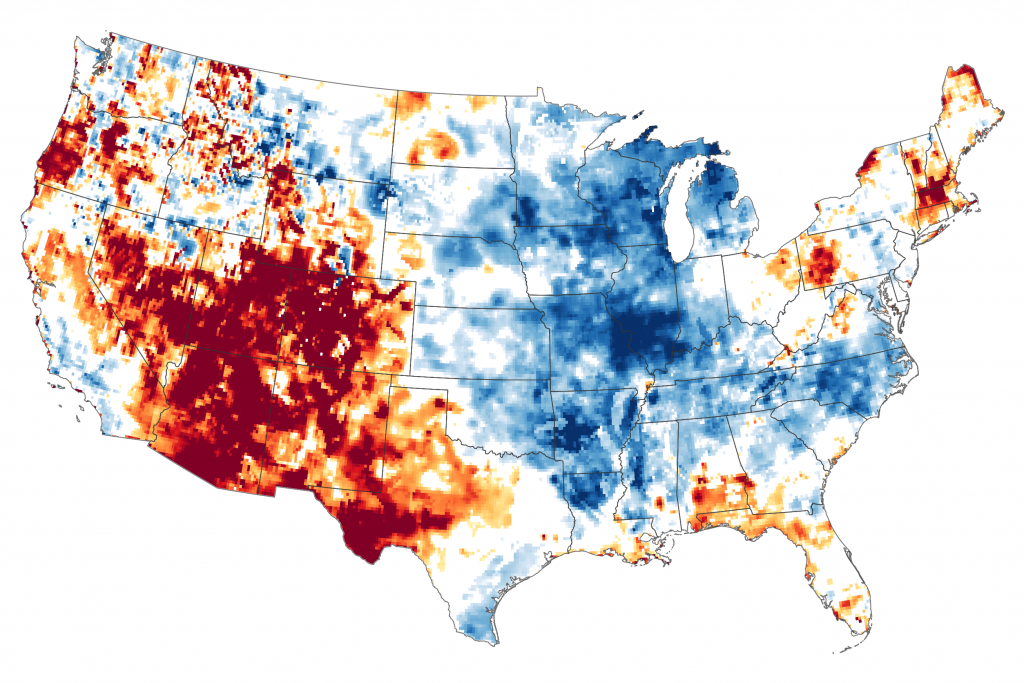 August 10: The GRACE-FO satellites detect the movement of water based on subtle shifts in Earth’s gravity field from month to month. Variations in land topography or ocean tides change the distribution of Earth’s mass and gravity field, as does the addition or subtraction of water. GRACE-FO data are integrated with data from the original GRACE mission (2002-2017) and with current and historical ground-based observations using a sophisticated numerical model of water and energy processes at the land surface.

Warm air temperatures and minimal snowfall in spring set the stage for the advancing drought. A ridge of high pressure over the northeastern Pacific Ocean has sent the jet stream farther north than usual. And meteorologists pointed to another failure of the southwestern monsoon for much of the parched landscape. In a typical summer, atmospheric high pressure over the southern Rocky Mountains draws moisture in from the Gulf of California and Gulf of Mexico and makes July and August the rainiest time of year in Arizona, New Mexico, and the Four Corners region—providing half of the year’s precipitation in some areas.

But this year the monsoon has failed to deliver. Atmospheric high pressure has been centered farther south than usual, drawing in westerly winds. Extreme heat has baked the region, with several states averaging temperatures 3 to 5 degrees Fahrenheit above normal. Phoenix has already set a record for the most days above 110°F in a calendar year (34), with five months to go. According to the Weather Channel, Las Vegas has not seen measurable rainfall since mid-April, and Cedar City, Utah, has recorded just 0.05 inches of rain this summer, making it the driest on record.

Forecasts from the NOAA Climate Prediction Center suggest that conditions in the West won’t get better any time soon. According to NOAA climatologists, hot and dry weather are expected through late October.

Prophetic Link:
“For nation shall rise against nation, and kingdom against kingdom: and there shall be famines, and pestilences, and earthquakes, in divers places.” Matthew 24:7.

Prophetic Intelligence Briefings are provided to show a link between current events and Bible prophecy only. The article summaries, which are not intended as a commentary in support of or in opposition to the views of the authors, do not necessarily reflect the views of Pastor Mayer or of Keep the Faith other than to point out the prophetic link.

This site uses Akismet to reduce spam. Learn how your comment data is processed.